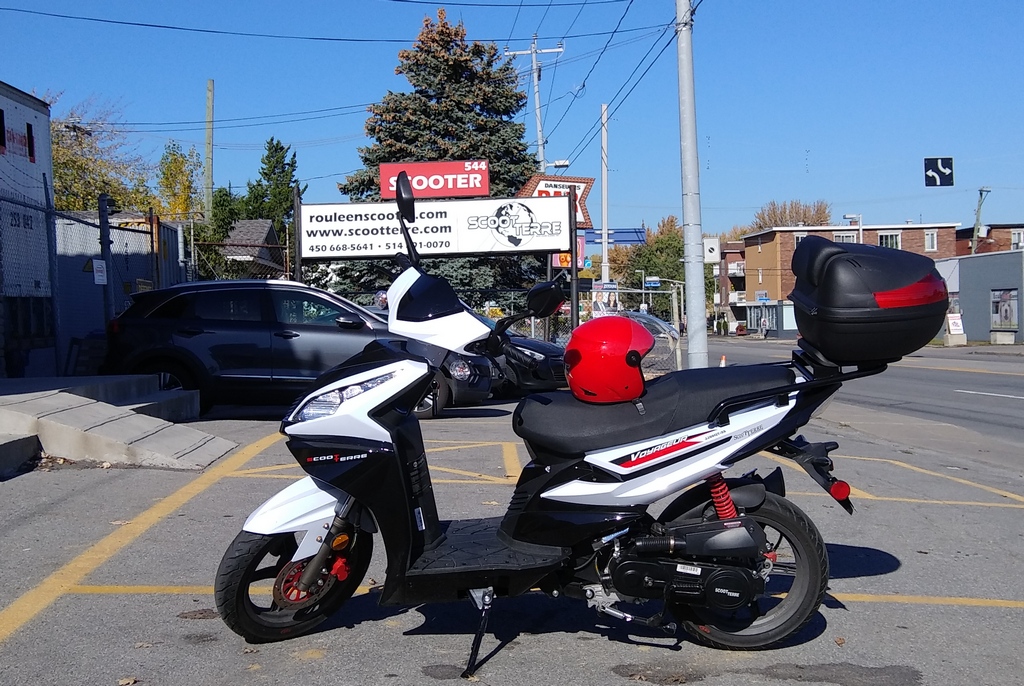 Back in 2016/2017, I’ve spent around 5 months traveling around Asia: China, Japan, but mostly South Asia, like Thailand, Indonesia, and a bunch of other countries.
The two longest stops were the island of Koh Phangan in Thailand, where I’ve stayed for about a month, and Bali, Indonesia, where I’ve spent almost 2 months. (and did a visa run to Australia… a bad idea! 😀 )
Both islands are full of spectacular views and fun things to do, and the most popular mean of transportation on both islands is a scooter.


After returning back to Canada I was thinking about buying a scooter as well, but owning a scooter here is not so pleasant.
– There is winter with snow and everything in Canada, so you can’t drive it half of the year.
– Here in Quebec province you can get only a 50cc scooter with a regular driver’s license, otherwise need a motorcycle license.
– North America is mostly a car continent, ie roads are made for cars, like, you can’t go on the highway with a 50cc scooter.
– Roads are bad (in Montreal), and if you can feel every pothole and bump (tabarnak!) while driving around in a car, you feel it 10x more on a scooter.
– There is not much choice in terms of brands/models and service.
– In Quebec, a license plate for a scooter costs the same as for a car. (thank you SAAQ)

With such a list, I’ve abandoned the idea of owning a scooter up until this year.
This spring, something has changed in my mind, maybe a lack of some adventures, and I’ve started searching for a scooter on the Internet.

I didn’t consider e-scooters, mostly because of lack of autonomy and/or speed, regular gas scooters can go 200km+ with one tank (4-5 liters) at 50-60km/h speed.
As I needed a bigger (but still 50cc) scooter to comfortably sit 2 people there were basically 2 choices in Montreal: Vespa/Piaggio or Scootterre.
Can’t remember the model, but a brand new good size Piaggio with 2 helmets and a box at the back of the scooter had a price tag of around C$6k with taxes and Vespa is even more expensive.
At the same time, Quebec/Chinese Scootterre Voyageur Urban with the same 2 helmets and a box was just around C$4k.
While Italians definitely build nice and better quality scooters, I couldn’t overpay that much for the thing, that will be used mostly for fun and just half of the year at best.
So, here started my little adventure.
First, there are 2 places in Montreal to buy Scootterre scooters. 😀
One on Papineau avenue and they were pretty quick to give me the price telling that the scooter would be ready in a couple of weeks.
Another place is in Laval and this is the actual owner of the Scootterre brand.
And there I’ve been told that they didn’t have any scooters at all, cause container with new models didn’t arrive. Oopsy Daisy!
I gave them my name to put on the waiting list, but it didn’t take too long and they called me back in a month or so.

Now, one summer and 700 km later I’m still a happy owner of the Scootterre and ready to share my thoughts.
1. Scootterre scooters use Supreme gas instead of Regular, it’s a bit pricier, but it still costs just C$3-C$5 for every 100-150km, unless oil prices rise dramatically.
2. Roads in Montreal are really bad.
3. At first my scooter was stalling while idling, but after some Internet search, I was able to easily fix the problem. There is a screw under the seat, that regulates motor RPM, if it’s too low, cold motor can stall.
4. Did I mention roads in Montreal? Yeah, they are bad.
5. It might be hard to do a cold start if the scooter wasn’t used for some time.
6. My top speed was 80km/h in the Atwater tunnel when going down! 🙂
7. Scooter started to make some strange sounds by the end of the season, but mechanic just told me it’s some dust and they would clean it till the next season.
8. Yes, I’ve put the scooter in storage in Laval, C$240/winter with oil change and battery recharge.
9. Basket at the back is very convenient to put second a helmet or some picnic stuff.

Here some pics from my Asia trip: