Slate Office REIT (TSX:SOT.UN) is a dismal Real Estate company that has been happily and methodically destroying shareholders’ value since going public.
Just take a look at the stock price chart:

On March 4, 2019, the management announced that it “Positions the REIT for Continued Value Creation” and cut distributions by almost 50%. How ironic! 😀
I’ve been buying and selling SOT.UN shares several times since 2017, but was lucky enough to stay away during the cut.

According to one of the calculators, I’ve found, total return, including distributions, since 2013 is basically zero, or more like negative if you factor in inflation: 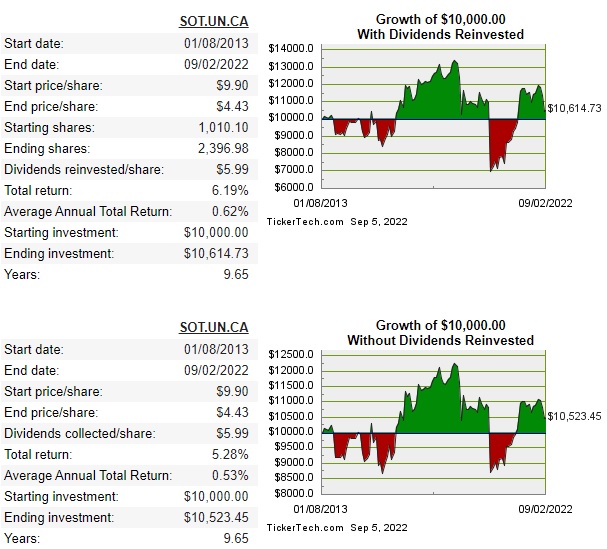 Many comment on the Internet (and I agree) that the main reason behind such a poor performance of the Slate Office REIT is its external management:

The REIT has a management agreement (the “Management Agreement”) with Slate (as defined in note 8), whereby SMULC as the REIT’s manager provides the REIT with the strategic, administrative, property management, leasing, acquisition, financing and construction management services necessary to manage the strategy and day-to-day operations of the REIT and its assets.

So this management charges SOT.UN the following fees:

Here is how it translates into real numbers for the three and six months of 2021 and 2022:

2022 is an exception because of Yew Groove’s acqusition, but anyway, management has collected ~C$12.5M in fees for 6 months.
At the same time SOT.UN has paid around C$16.3M in dsitributions during the same period:

To sum it up, there is the management that made ~C$14.1M and the rest of the shareholders who made ~C$14.7M in the first 6 months of 2022.
By simply replacing Slate management with an in-house one that actually cares more about shareholders and less about their own fees, you can drastically improve SOT.UN‘s financial position and valuation.
Lots of shareholders might have similar thoughts and are not happy with the management and Board of Trustees, who are supposed to ensure the best interests of stakeholders in all types of management decisions.
The latest voting results from the 2022 Meeting of Unitholders show that all the Trustees received less than 60% of the votes.

They keep buying shares on the open market and at the moment have acquired more than 11M, which is more than 13% of total shares.
After watching this informative video about George Armoyan, I’ve decided that this buzz is for a reason and started to buy shares myself.
The downside, in my opinion, is being a bagholder of an undervalued REIT with juicy distribution. Unless some black swan event happens (how about sky high electricity bills in Ireland?), the stock price and distributions won’t go much lower.
On the upside, I will vote for anything George Armoyan proposes, especially if it is to change the management or takeover.

And a possible reason for the share accumulation by activist investor can be found in the Slate Office REIT Annual Information Form:

My opinion: BUY AND SEND RAYS OF LOVE TO GEORGE ARMOYAN.

Given the state of the world economy in general, and the Canadian economy in particular, it appears that I’ve been giving too many “BUY” ratings recently. 😀
Well, que sera, sera!

2 comments on “Slate Office REIT. All in on Armoyan”